Andrés Muñoz is a Chilean lawyer. He graduated from Universidad de Chile with a thesis on cultural rights as human rights. The relation between law and culture, and the practical applications that result from this link, are his main research interests. At Law School he served as a teaching assistant of philosophy and published two articles on philosophy of law. He holds a diploma in International Cultural Relations from Universitat de Girona and the Organization of Ibero-American States.

He is currently employed as an associate attorney in a large law firm in Santiago, focusing his practice on regulatory and environmental matters. He has previously worked in the field of human rights and completed a professional internship at the Office of the United Nations High Commissioner for Human Rights. He has also been a research collaborator with the Observatory of Cultural Policies, an NGO active in the Chilean cultural sector.

During my Faber residency I will work on the idea of cultural identities from a philosophical and human rights perspective. I would like to reflect on more concrete applications of diversity policies considering the conceptual framework of cultural rights as human rights. Fortunately, dialogue with other Faber residents will likely provide new perspectives on these issues.

I also intend to revise and update my thesis on cultural rights as I wish to publish it as a book. And I look forward to the experience of enjoying the culture of Olot and the nature of La Garrotxa, which will surely help to inspire ideas.

A wonderful experience for reflection, walking and exploring Olot and La Garrotxa.

For more than two weeks I have had the fortune to reside in the magnificent city of Olot. Here I have had quality time to work (on my book project on cultural rights), but also to walk around the city and its beautiful surroundings, take part in some local cultural activities, have fruitful dialogues with other residents and local people here and, ultimately, reflect on issues related cultural diversity and my research interests.

Olot is the capital city of the Garrotxa comarca in Catalonia and is situated in the middle of the volcanic natural park of the same name. In this impressive location, Faber residency is held. The charming Hotel Riu Fluvià, named after the river that crosses Olot and a large part of the Girona province, offers a wonderful view of the volcanoes. Here I have been able to make some progress on the revision of my thesis on cultural rights. But in this stay I have also wanted, mainly, to get to know Olot and La Garrotxa and to take part in the local cultural life.

So I walked through the streets of Olot and walked around the roundabouts of Plaça Espanya and Plaça Americà, where I found the Avinguda Xile and a replica of a Moai of Easter Island, which symbolically reminded me of my country. Another day I climbed the Montsacopa volcano and passed through its grassy crater, the towers of Sant Francesc and the church of the same name, outside of which I contemplated the panoramic view of the city.

I then went down and entered the old Plaça de Braus Arrastre, the oldest bullring in Catalonia, which is no longer used for bullfights but is a great venue for exhibitions and other activities. I then walked down by the Firalet and admire the city at dusk early in autumn. Then I continued by the Firal, maybe stopped for a coffee and a quick look at the newspaper in Catalan.

I also visited the four main museums of Olot: (1) the Can Trincheria where you can see seventeenth-century furniture that give account of the local lifestyle of the time; (2) La Garrotxa, in which you can observe part of the artistic heritage, especially iconic paintings of the Olot school of landscape painting; (3) des Volcans in Parc Nou where you can learn more about the nature of the Garrotxa and where I learned that earthquake in Catalan is « terratrèmol»; and (4), last but not least, the Museu dels Sants, the one that personally liked the most partly due to the beauty of the building in which is located (Casa Vayreda) but also for the interesting tradition of Olotian craftsmanship and religious figurines.

Together with part of the Faber team and residents we made an excursion to Besalú, the medieval city with an astonishing Romanesque bridge; we saw Castellfollit de la Roca, another beautiful old town built upon volcanic rock; and we walked around the singular constructions of Josep Pujiula i Vila in Parc d’en Garrell. Then I went hiking through La Fageda d’en Jordà and got lost in the paths of alls forests.

I also had the luck to attend the Festival Lluèrnia del Foc i la Llum, which once a year mounts in Olot a series of artistic installations that are distinguished by their luminosity, which are appreciable after sunset and magically illuminate the old town for a few hours, as the public luminaries are turned off while the garrotxinos and visitors enjoy an amazing nocturnal walk.

On the other hand, I was also able to give two classes at La Garrotxa Secondary School with students between the ages of 15 and 17, which allowed me to share my vision of cultural rights as a form of retribution to the community. This activity was made possible thanks to the help of Xavier Ruscalledas, whom I met in one of my first days of residence when I attended the opening ceremony of the Lluèrnia Festival, in Can Sau next to the Església de la Mare de Déu del Tura.

I am also grateful to him because, together with his family, he invited me to visit some of the architectural works of the prestigious RCR Arquitectes studio, including l’Estadi d’Atletisme Tussols-Basil, in what was a beautiful Sunday promenade.

Finally, I can say that besides being able to make progress on my work, I actively participated in the cultural life of Olot as a temporary visitor/resident (or at least did a good effort trying to!). I am therefore very grateful to Faber for this wonderful and unforgettable experience. 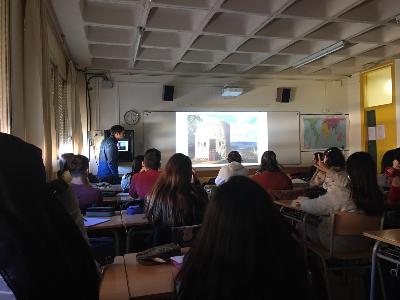 Cultural rights: what for?