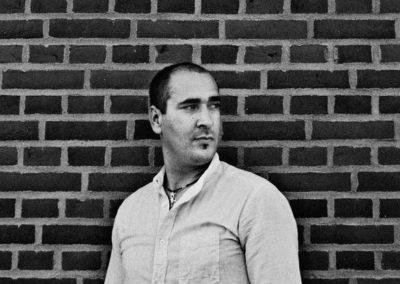 Noufel Bouzeboudja is an author from Kabylia. He has been an English teacher and he has also directed many theatrical productions, written novels, and contributed to the US-based radio station Radio Numydia and the online platform Kabyle.com. He has lived in different countries: Spain, Denmark (as an ICORN writer), Belgium, France.

He now lives between Paris and Kabylie, where he collaborates with many associations and networks in different domains mainly creative writing and theater workshops.

Noufel writes and translates in many different languages, including Kabyle, Arabic, English, and French. His latest publications are a novel in English entitled: A Pebble in the River and a short stories collection in his mother tongue Kabyle: D Tayri Kan! (‘It’s just love’). His cinematic poem Allegoria has been awarded by several international festivals.

Still looking for a title, Noufel’s project is a “serious comedy” to denounce all kinds of extremisms in nowadays world, especially in Europe. The play is linked to many current subjects such as: immigration, stereotypes, work discrimination, religious and nationalistic extremism, war…

It tells the story of Massi, a robbed African war fleeing child, “illegally” adopted by his dear mommy. Massi is a young man living in a European capital. Though being graduated and qualified, he doesn’t have a proper job because of his “name and origin”. He tries “to find his ways” working as a bike cab.

When you love what you have, you have everything you need

When you love what you have, you have everything you need. This Catalan proverb perfectly summarises the path that Catalonia took and continues along to take its own destiny in its hands. It’s not difficult to take control of one’s own destiny when there’s already awareness. I’ve seen it. I’ve experienced it. And, in Kabylia, loving life, I felt the pangs of jealousy. Positive jealousy, of course. After being selected for this new writing residency (Faber) in Olot, Garrotxa, the fascination was immediate. My Spanish and my French do their best to get me by. I understand Catalan més o menys, more or less. I’m encouraged with a “Molt bé!” (very good) every time I learn a new word or two.

As any human does while travelling, I let myself get carried away by the comparing game. A game that can sometimes be serious, sometimes funny. Catalonia vs. Tamurt (Kabylia). Catalans vs. Kabyle people. Different historical and social contexts, indeed, but when Catalan writer Anna Ballbona tells me about how her grandfather lived, it reminds me of how mine lived. And the two of them sat around a fire and their mothers would tell them stories. The two learned their mother tongues through stories, poems, everyday-life interactions, through knowledge bursting with experience learnt from the university of life, not schools and colleges. Many Catalans were persecuted, killed or banished during Franco’s dictatorship. Their language prohibited. It reminds me of Boumediene. It reminds me of the years when Kabyle couldn’t be spoken in the streets.

Since then, History has made its way. History was kinder to Catalonia.

I can see it here in Olot and the surrounding villages. I can see how proud the people in the streets are to be Catalan. I can see it in their eyes. In the way they say good morning: “Bon dia!” In their bookshops full of books written in their own language. I observe it in their literary, political and social debates. I observe it on their prolific television channels and radio programmes. I notice it in their cinemas, in their theatres, in their beautiful, clean towns and villages. Catalonia is not folkloric. Catalonia loves its writers, artists, researchers, creators, historians, etc., and sets a prominent place aside for them. Maybe not as much as their footballers, that much is true, but their editors and literary critics have a place in Catalan magazines and newspapers.

I’m filled with wonder every time I stand in front of a bookshop, a newsagent’s kiosk, the cinema or theatre billboard or an information board. I start to daydream like a kid. I imagine myself in Kabylia standing in front of a bookshop where the books written in Kabyle are arranged in order and clearly displayed, and not left at the back of the shop or strewn in a dusty corner. I see myself di Tmurt [sic] sat at a table in a restaurant where I’ve just ordered something from a menu written in Kabyle. I can imagine myself in a library in Freha or Tizi Ouzou flicking through a Catalan-Kabyle bilingual version of the latest book by Salem Zenia ‘Jo soc l’estranger’ (Nekk d ajenṭa) that I found in a bookshop in Olot. Catalans are aware of what they have and KNOW how to cherish it. Whether rich or not, the majority is well versed in culture and literature. Many Catalan entrepreneurs invest and sponsor art and literature, the essence of an entire people. All men and women, except those who only indulge in the spoken word, read and write in their language.

It’s therefore up to us to love what we have, what we are, by ourselves, among ourselves, for ourselves, before the “others” come and dictate to us, for better or worse, without shutting ourselves in, without useless adversity, without hate, without “folklorisation”. That’s how we’ll have everything we want.