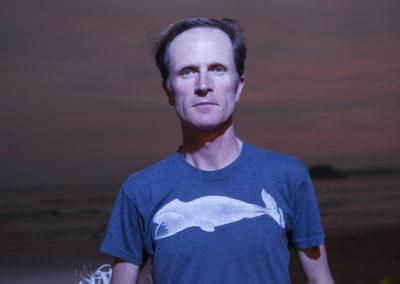 Philip Hoare (born 1958, Southampton) is the author of seven works of non-fiction: Serious Pleasures: The Life of Stephen Tennant (1990) and Noel Coward: A Biography (1995), Wilde’s Last Stand: Decadence, Conspiracy, and the First World War (1997), Spike Island: The Memory of a Military Hospital (2000), and England’s Lost Eden: Adventures in a Victorian Utopia (2005). Leviathan or The Whale (2008) won the 2009 BBC Samuel Johnson Prize for non-fiction.His latest book, The Sea Inside, has been published by 4th Estate, UK, Melville House, US, and Ático de los Libros, Spain. He was a guest of the British Council at the FIL Guadalajara in 2015.

An experienced broadcaster and curator, Hoare wrote and presented the BBC Arena film The Hunt for Moby-Dick, and directed three films for BBC’s Whale Night. He was co-curator of the Icons of Pop exposition at the National Portrait Gallery. He teaches at the University of Southampton, and was awarded an honourary doctorate by Plymouth University in 2011. He is a regular contributor for The Independent, The Guardian and The Times Literary Supplement.

Philip Hoare has been writing, almost unbeknownst to him, what is now shaping up as a trilogy of the sea: from Leviathan or the Whale to The Sea Inside and the third volume in which he is currently working. He has travelled to Cape Cod, Australia and Azores in search of the whales and the inspiration that connects him to the sea. His works delve in the ocean as the unknown and unexplored territory, what Herman Melville called «the ocean’s skin», its absence and its presence. The way humans turn their backs on it, but alas remain dependent on the life it brings. The hope it offers migrants, and the terror and death that it punishes them with: the sea as the limit and a tragic possibility. The whale as a symbol is freighted with all these meanings, and is the timeless carrier of our culture, an emblem of the drastic dividing line between human and natural history. This is what he will be exploring during his stay at the Faber Residency, where he will be writing the third volume of The Sea Trilogy.