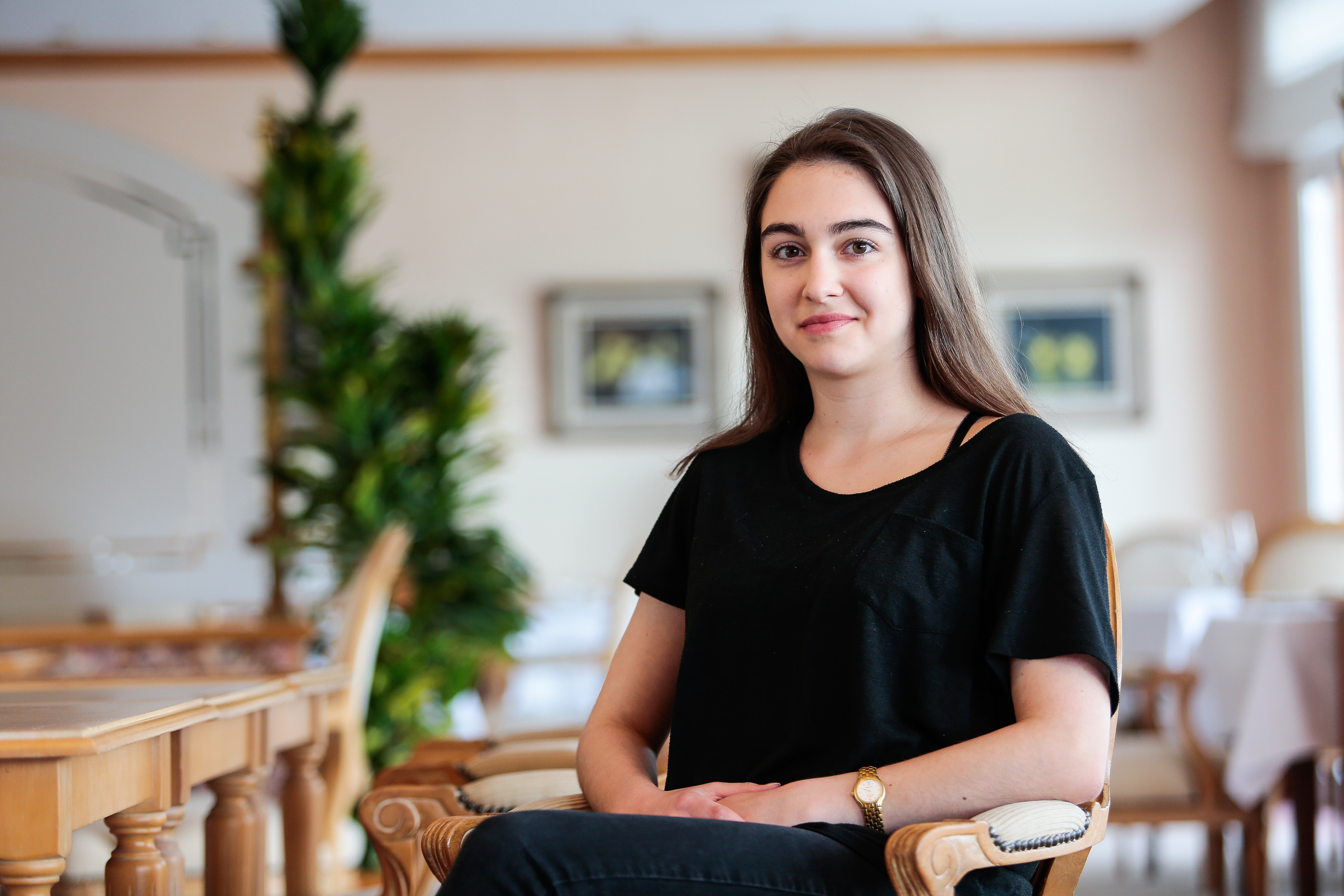 Teresa Fazan is a dance and theatre critic living in Warsaw, Poland. Currently, she is studying at the College of Inter-area Individual Studies in the Humanities and Social Sciences at the University of Warsaw. She is regularly publishing critical reviews of contemporary dance as well as choreography and also participating in various projects, conferences, and residencies. In her academical research, she is particularly interested in relations between the theory of art, aesthetics, and phenomenology.

I would like to use my experience as a dance critic and a researcher to prepare a critical paper about the process of creative work of the company in the residence. I plan to analyse practices used during the rehearsals. I intend to use such tools as: active observation, interviews with dancers and open discussions. Moreover, I would like to share my experience in a form of a few informal lectures, concerning body movement, improvisation, and dance in relation to the researches of phenomenology, philosophy, and cognitive science.

The nature of the movement – practised and observed

During my stay at a Faber Residency I had a chance to participate in a few rehearsals of the group Lamajara (a dance collective consisting of the three dancers: Paloma Hurtado, Daniel Rosado and Reinaldo Ribeiro) during their work on a project Labranza (The Tillage). Below I present some details of the project, which I gained while observing the work of the dancers and talking with them, as well as some of my own reflections on the project.

Dance has always been considered a problematic kind of art for the philosophers. There are many obstacles, which make it almost impossible to theorise or even conceptualise dance. It is there only when it is being performed, it disappears the moment the body gets still, and – the worst of all – in the most of the cases it makes no literal sense. When we dive deep into that thought, we will soon realise that dance is similar to the other topics which are doubtful for the philosophers: the most primal actions and activities of the human life. Paradoxically, it is easier to talk about and to understand more complicated or sophisticated issues than what seems to be the most basic and the easiest to understand. What is the relation between the body and the mind? How do we use the objects and tools around us? How do we cooperate with one another? How do we manage to remember the movement or mimic it from someone else? How is it possible that we can create the choreography or improvise? Phenomenologists and cognitive scientists have been reflecting on those issues for years, yet we still do not own the satisfying answers. Perhaps the sufficient denouement of those issues will appear in the following years, however it seems like they require a valid reaction right now. Thus, perhaps the narratives about those activities of the humans should be conveyed in a corporal and motor language of the movement? It seems like the only way of phenomenological comprehension of the human activity is through participation – as an active participator or as the observer. The project Labranza by Lamajara Collective gives the viewers a chance to experience the human movement in a pure and complexed way.

How a movement practice can be used as a way of sharing a human, essential experience of the corporal being? Three dancers seek for the answer during the process of working on the project, which divides into the three dimensions. On the one level, the artists from Lamajara are developing a practice method, which could be applied to the different situations and used by the users with various dancing skills (professionals as well as non-dancers). Set of the exercises developed in the frame of the practice is aiming to activate the basic, playful potential we all hold within our motor system. The other level is a social activity they are creating in the cooperation with the locals – the group of non-dancers, who volunteered to participate in the project. The last level is a dancing performance, which at the moment is being performed by the three dancers from Lamajara, but at the end of the process is supposed to be danced by a group of professionals.

The groundwork for the piece was primarily developed during 10 days stay at a local farm. Three dancers were working in the field planting, cropping and harvesting. The core intention was to develop the movement basing on the natural actions of everyday life. Using the patterns derived from those real life experiences they worked in the studio developing different interpretations of the movements and searching for new levels of experiencing those activities. Developed movements are supposed to represent the vitality of human carnal and motor expression. The encounter of the dancers and farmers, both of whom work mainly with their bodies, is an interesting space for a reflection on the primary part of the human identity. Artists wonder whether this core, bodily nature of human beings is something that unites us stronger than the cultural differences divides us. It is worth noticing, that the artists cover the mirrors during the rehearsals in the studio. In a traditionally created choreographies, artists use the mirrors to observe themselves from the outside, to control the movement and correct themselves when something appears different than expected or simply wrong. The act of intentional refusal to do that, is targeted to enable dancers to simply be a body and not a certain idealisation of the body. In this process the visual and aesthetic outlook is subordinate to the meaning of the experiences created during the process, which is shared by the participants as well as viewers.

During developing the practise artists fixed three kinds of basic movement – grabbing, pulling and pushing – and also three levels of the movement. First one, squatting, was based on a position used during seeding the crops in the field. Second one, leaning towards the ground, was based on the action of picking up the seeds or the plants from the ground. Last one, standing, comes from the moment of no-action, observing, relaxing and preparing to work on. Being developed and created in rigid closeness to everyday, basic experiences of people and their everyday chores, piece is aiming to create the natural, honest atmosphere, which is not mediated by any intellectual interpretation. While understanding the nature of human life in a very basing and primal way, artists emphasise the bodily and corporeal nature of human experience. Very important and primal for human experience are the tools used during the work. Dancers from Lamajara use the stick as a simplified, physical representation of a tool as well as metaphor of it. The stick as a simple object can be interpreted in various ways – as a walking stick, a cropping tool, natural object (a branch) and so on. During the rehearsals it played different roles – sometimes being an object used by artist while improvising and looking for new movement possibilities and finding ways it could contribute to experiences shared by the group. While dancers are improvising in the studio they use the sticks as a movement triggers. A stick is an object between two dancers who by its presence connect with each other. This non-direct contact is changing the traditional contact improvisation nature. The sticks are framing the possibilities for the movement, they are encouraging dancers to discover out of the box movement solutions. In other exercises they appear to be sport alike tools, when dancers throw them to one another and attempt to catch them.

Both choreographies – one performed by the professionals and one performed by a group of the volunteers – are created basing on the sequences of the fixed improvised sets. This method opens a space for an authentic movement experience – both for professionals and the amateurs. As a social project Labranza gives the participants a chance to experience their bodily existence in a different way than they are used to and to use the dance as a way of individual and shared way of expression. Both the exercises developed as a part of the method and the simple choreography prepared for the participants reflects the important components of the group cooperation. As a partners, performers have to realise how their action both influences and depends on the movements of the others. It is very vivid when performers are connected by the sticks, but it is also visible when they dance together without direct physical contact. Watching the professionals and amateurs during the rehearsals is very different – they move differently and it is obvious that they experience the dance differently. Nevertheless, the work of the company makes us aware that human movement – no matter whether professional or private – has its core essence in our basic and simple carnal existence. What is more, Labranza project raises many questions on the other topic, also important for its creators: the nature. Nowadays the questions such as – what is natural? or what is the nature? – seem very complexed and uneasy to answer. In the very base of the development of the human civilisation lies the idea of the conquest and exploitation of the nature. It appears that the nature is not important to us – at least as long as we are concerned as a social and cultural beings, living in the giant metropolises in 2017. But dancers from the Lamajara pose the question of the personal relation to the nature, which they privately explore, sharing their thoughts and experiences with one another, with the participants and the viewers. They perspective may seem a little bit naive, but their creation conveys a genuine and thought-provoking experience.