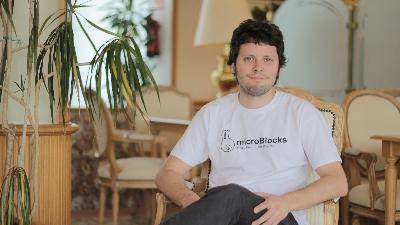 Bernat Romagosa is a software engineer. He is the author of Snap4Arduino, the main developer of Beetle Blocks and a contributor to the Snap! programming language. He was part of the Edutec group at the Citilab for 6 years, where he worked on developing an online programming school, a social knowledge management system, different educational applications, and a bunch of Snap! modifications. After that, he worked for Arduino.org for a year and a half, further developing and maintaining Snap4Arduino.

As a freelancer he now works, among others, for the BJC project, where he contributes to the Snap! programming language. He is also working with John Maloney and Jens Mönig on MicroBlocks: a blocks based dynamic programming language for microcontrollers.

MicroBlocks is a new programming language inspired by Scratch that can run right inside microcontroller boards such as the micro:bit, the NodeMCU and many Arduino boards.

The MicroBlocks system allows for dynamic, parallel and interactive programming, just like in Scratch, but with the twist of having your projects run autonomously inside the board without being tethered to a computer, thus offering the flexibility and liveness of tethered blocks programming without giving up the real-world applications of low level microcontroller programming.

With MicroBlocks, you can build your own digital instruments, interactive jewelry, electronic games and measuring devices, all by using blocks.

Remote work is one of the futuristic predictions often portrayed by tech magazines from the beginning of the digital era. Teams made up of people from all over the globe could work together in common projects without having to leave home, all thanks to videophones like the ones in science fiction movies, devices that have already been rendered obsolete and replaced by videoconferencing apps without having stepped foot in our households.

Our project, microBlocks, wouldn’t exist hadn’t this prediction come true. The three members of the team work remotely, spread between two continents and three different countries, and we regularly meet over the Internet to talk about our future steps or stay up to date with whatever each of us has accomplished. It can’t be denied that Internet has enabled us to work together while living in different spots of the world, but remote collaboration also implies that our project advances at a much slower pace than it would if we were to share the same physical space. That is why, whenever we have had the chance to meet at a conference, we have tried to be there some time before or after the event to get to spend at least a few hours working together.

Thus, when Toni Moreno told me about the possibility of getting the microBlocks team together for a week at FABER, I immediately thought it would be a great opportunity for us to work on the project and push it forward. However, this residency has served us for far more than advancing the project farther than we thought we would. We’ve had time to take walks in La Fageda, visit Olot, talk about the future of the project, or get to learn about the projects of the rest of the residents, with whom we got along right away and shared exciting conversations around all kinds of topics.

To us, it has also been priceless to have so many people around us trying out our programming language and spending all week helping us prepare our workshops for Robolot, finding bugs, suggesting improvements or even sketching educational activities for schools.

More important than all of these, though, are the bonds we’ve established with each other after spending a week together. One evening over dinner the conversation drifted towards the different life paths that each of the residents had followed in pursuit of their own passions, and we found out that we all had much more in common than we imagined.

This week, topped by our visits to some schools in Olot, our participation in the Robolot conference, and the outstanding landscapes of La Garrotxa, will remain among the most relevant times to our project and our team.