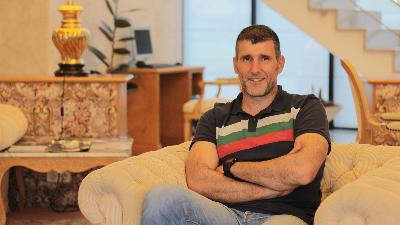 He studied Agronomic Engineering in León in the specialty of Mechanization and Rural Constructions. After more than 6 years working as head of the engineering and machinery department in a company specializing in the dairy sector, he decides to leave everything for teaching, his real passion. In 2006 he approved the secondary exams in the specialty of Technology, being his first destination the IES Ricardo Bernardo de Solares. In 2010 the IES Valentín Turienzo de Colindres joined the current center and was named president of the Association of Teachers of Technology of Cantabria. In 2011 he participates with two teams of students in a robotics competition at the international congress OCEANS’11 IEEE Santander. In 2012 he visits Robolot for the first time and at that moment discovers the true potential of robotics in education and proposes to create a robotic contest in Cantabria. In 2013 CantabRObots created a competition-exhibition of educational robotics in Cantabria. In 2015 he leads the working group that develops the LOMCE Technology Curriculum for Cantabria in ESO and Baccalaureate, and proposes the creation of the subject of Control Systems and Robotics for 3º ESO.

For several years he has been a speaker of teacher training courses with topics related to school robotics such as; 3D design and printing, different development platforms such as Arduino, Picaxe and Micro-Bit, programming with Scratch, Blockly, IDE Arduino, AppInventor… He participates as a coach of several robotics school teams in different competitions such as CantabRobots, Robolot, EuskalBot, LNRC, Cátedra de Viesgo, UNICAN Science Fair, … Standing out in 2017 to win the RoboCup Junior Spain and participate in the Junior Robocup in NAGOYA (Japan).

CantabRobots is a competition-educational exhibition of technology and robotics among the students of educational centers of Cantabria. Initially part of the CantabRobots 3.0 Project, a faculty working group created to generate teaching materials related to 3D design, 3D printing, programming, electronics and robotics in the Technology area.

This initiative is a bet of the Ministry of Education, Culture and Sports of the Government of Cantabria, in collaboration with the Association of Teachers of Technology of Cantabria, for the promotion of creativity, teamwork, entrepreneurship, innovation, the use of new technologies and sustainability, in line with the framework objectives of the Europe 2020 strategy.