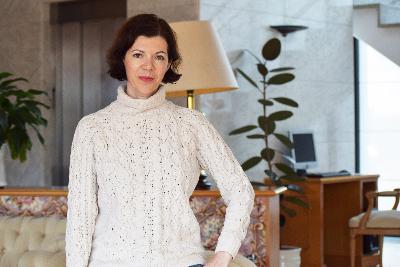 Anna Matveeva is a Russian writer. She was born in Sverdlovsk (now Ekaterinburg) in the Urals, into a family of linguists and, after completing her studies at the Ural State University, she worked as a journalist for newspapers and magazines.

Anna has published 18 books (fiction and non-fiction) and contributed for most leading Russian periodicals. Translated to Italian, French, English, Finnish, Czech, Polish, Chinese etc. And she has won several awards.

I am planning to complete work on my new novel (its working title is Every Hundred Years) is based on the life story of my grandmother, Xenia Levshina. She was born in 1885 in Poland and lived an extremely interesting and complicated life, in which there were a lot of trials. Throughout her life, starting from the age of fifteen until her death, she kept diaries, the last ones being written in French, because my grandmother was a teacher of French, a founder of the department of foreign languages ​​at the Sverdlovsk Mining Institute, and even a military translator. The novel will be based on these documents, as well as on the letters and other documents from the family archive that I inherited from my father and, as with my previous novels, will be written in a genre at the crossroads between fiction and non-fiction.

The magic of Faber.

The week at Faber in Olot was absolutely lovely and a very productive for me!

I put the finishing touched on my new novel Every Hundred Years and started to write a first short story for a new collection. Fantastic nature of La Garrotxa inspired me very much. I felt the energy of volcanoes, even they are sleeping for thousand years!

Here, in Faber, one writer became for me a guiding star –Julio Cortazar, my idol since youth. Why and how? That’s a magic of Faber! I met here other resident, Marta Jordan, she’s a translator from Poland, amazing, extraordinary lady. Marta was a translator of Cortazar’s plays and short stories, moreover they were friends. Can you imagine it? For me it sounds like somebody was a friend of John Lennon! Even more! We have told a lot about Cortazar– so genius from Argentina combined Russia and Poland in the fabulous Catalonia. As I’m a journalist too, I decided to do an interview with Marta for one Russian media – and we did it here, after the long days of working and walking and talking.

By the way I “met” here one more catalan genius – not a writer, but sculptor and painter. Jose Maria Sert, who was a beloved husband of Misia Sert, the heroine of my recent book “Picture Girls” (it’s devoted to the models of great artists of the past, from the ancient Phryne to Gala Dali). Sert was buried in Vic, so I dreamed to visit this wonderful place and the residence gave me this opportunity. All people in Faber were very kind, attentive, caring and helpful to me and other residents! I’m happy to be back here…